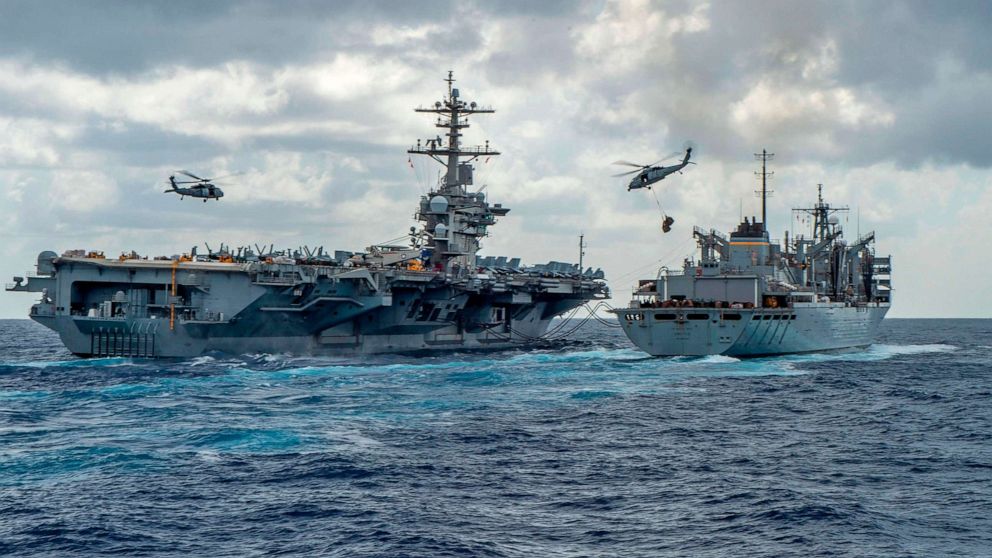 Lawmakers on Capitol Hill on Wednesday said they were alarmed that they haven’t been adequately briefed by the Trump administration about the growing tensions between Washington and Tehran.

“Removing personnel from embassies and consulates is clearly a serious move by the State Department,” Sen. Lindsey Graham, R-S.C., told reporters on Wednesday. “They feel the threat. And I would urge the State Department and the [Department of Defense] to come down here and explain to us what’s going on.”

In a closed-door discussion with Democrats Wednesday morning, House Speaker Nancy Pelosi urged her colleagues to oppose any potential armed conflict with Iran.

“Let me say that we have to avoid any war with Iran,” Pelosi told her caucus Wednesday morning, according to a senior Democratic aide.

Pelosi also told her colleagues that the administration still has not agreed to conduct a briefing for the full House of Representatives, which she characterized as part of a general effort by the administration “ to deter us from having our role” enumerated by the constitution.

“They have no business declaring a war without the consent of Congress, A,” Pelosi stressed. “And B, the very idea that they would say that they would use the authorization of the use military force that is 18 years old and something by now – whatever its age, it’s not appropriate in terms of its scope, its geography, its timing for any actions they might take, wherever they may be taking them.”

Lawmakers’ concerns were raised after the U.S. State Department ordered all non-emergency government employees to leave the U.S. embassy in Baghdad and U.S. consulate in Erbil, Iraq, amid tensions with Iran and warnings about possible threats to American interests in the region.

The order came after U.S. officials told ABC News last week there were “clear indications” Iran, through its Islamic Revolutionary Guard Corps (IRGC), or Iranian-backed proxy forces were preparing for a possible attack against U.S. forces at sea and on land, including in Iraq.

“I think there are a lot of people in my shoes that are going to support standing up to Iran, but we need to understand what we’re doing,” Graham said.

“So I would urge the administration to come down here and brief members of Congress about the threat as they see it coming from Iran,” he said.

While rank and file members await a briefing, eight bipartisan leaders in Congress lawmakers who are briefed on intelligence-related matters by the executive branch, known colloquially as the Gang of Eight, are expected to receive a closed-door, classified briefing on Thursday.

Senate Minority Leader Chuck Schumer took to the Senate floor late Wednesday to demand acting Defense Secretary Patrick Shanahan and Chairman of the Joint Chiefs of Staff General Joseph Dunford to testify before the Senate Armed Services Committee in an open setting before the end of the week.

“The hearings that are done in secret, do not inform the American people of what’s going on, and they are entitled to know. Because the lessons of history teach us that when these things are done in secret, behind closed doors, mistakes can be made and momentum built for a course of action that the nation ultimately regrets,” Schumer said.

GOP Sen. Mitt Romney of Utah told reporters that he had received a personal briefing on the situation, but he didn’t clarify who had briefed him.

“There is intelligence that indicates that Iran may be considering some kind of malevolent activity relative to our interest, our people in the region,” Romney said. “And the administration is showing that we have the capacity to deter that…it’s also out of an abundance of caution appropriate to remove individuals who might be in harm’s way.”

The U.S. Embassy issued a statement that called these ordered departures “appropriate given the current security conditions,” but did not detail the nature of any threat and whether there was anything new or different from the threats of attacks last week that Secretary of State Mike Pompeo said “were imminent.”

Pompeo made a surprise visit to Baghdad last week to brief Iraqi officials on the U.S. intelligence regarding the threat streams.

Rep. Tulsi Gabbard of Hawaii, a Democratic 2020 presidential candidate and Iraq War vet, told ABC News Live on Wednesday that she sees ominous parallels between the Trump administration’s vague public case on the urgent threat from Iran, and the faulty intelligence used by the George W. Bush administration to justify an invasion of Iraq in 2003.

“What we have heard so far has been shallow and superficial at best,” Gabbard said on “The Briefing Room.” “What we’re seeing instead are actions coming from President Trump and his administration led by John Bolton that are dangerously escalating us closer and closer toward a devastating war with Iran.”

Earlier on Wednesday, the top Democrat on the Senate Foreign Relations Committee, Sen. Bob Menendez of New Jersey, had strong words on the lack of information from the administration.

“There are only two reasons for ordering their departure: we have credible intelligence that our people are at risk, or in preparation for military action in Iran,” Menendez said. “The Trump administration has not provided any information to this committee on the intelligence behind their decisions or what they plan to do in Iraq or Iran, and I have repeatedly reminded the administration of its responsibilities to this committee.”

The chairman of the Senate Foreign Relations Committee, Sen. James Risch, R-Idaho, said he had received a briefing and is working to arrange one for the full Senate sometime next week.

“That is no substitute for directly briefing the committee today when there is clearly actionable intelligence available, nor is that timeline itself acceptable,” Menendez said in the hearing.

Menendez also stressed that Congress has not authorized military action against Iran.

“If it were contemplating military action with Congress, it must come to Congress to seek approval,” Menendez said of the administration.