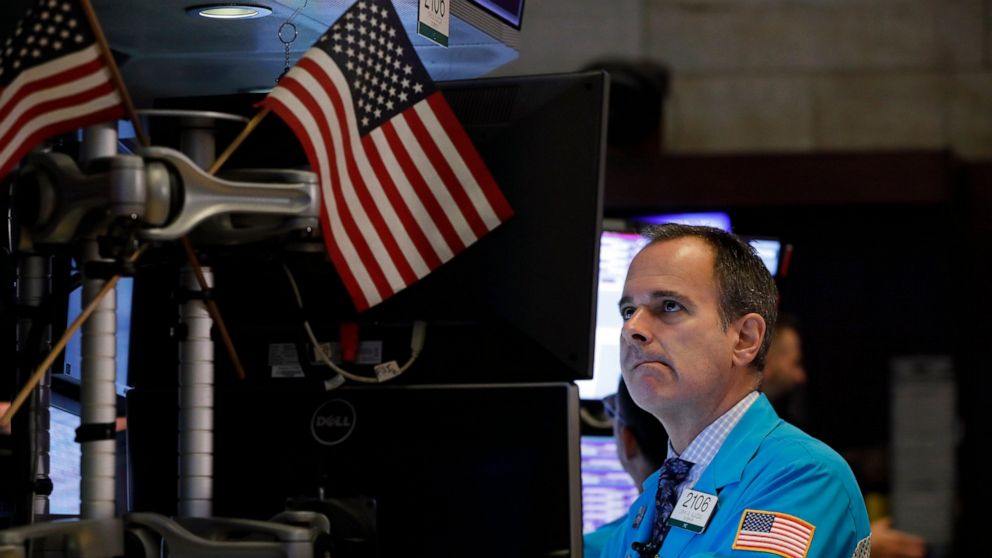 Increased tensions ahead of U.S.-China trade negotiations knocked down stocks on Wall Street in afternoon trading Tuesday and stretched the market’s losses deeper into a fourth week.

The U.S. blacklisted a group of Chinese companies after claiming that their technology plays a role in the repression of China’s Muslim minority groups. The latest move casts more doubt on whether the world’s two largest economies will find a resolution to their long-running and economically damaging trade war. Envoys from the U.S. and China are preparing for another round of negotiations this week.

Technology stocks were among the biggest losers as chipmakers absorbed the impact of the latest U.S. restrictions on sales to China. The sector has been absorbing much of the volatility from swings in trade war sentiment because many of the companies face bigger risks to sales and supply chains.

The yield on the 10-year Treasury fell to 1.53% from 1.55% late Monday in a signal that investors are heading for low-risk investments amid the trade war turmoil. Utilities and real estate companies, both safe-play sectors, held up better than the rest of the market.

ANALYST’S TAKE: Investors had to digest yet another surprise escalation in the U.S. trade war, adding another worry to a plate full of political and economic concerns.

“The jockeying for position in front of the Thursday and Friday meetings in Washington has intensified perhaps more than the market could have imagined,” said Julian Emanuel, chief equity and derivatives strategist at BTIG.

OVERSEAS: European markets fell broadly. The British government warned that chances of a separation deal with the European Union are fading. The U.K. is on track to leave the 19-nation block on Oct. 31 but doesn’t yet have an agreement on trade in place.

The separation is also weighing on the broader European economy, which is already facing slower growth amid international trade disputes.

Asian stocks were broadly higher. Markets in the Chinese mainland resumed trading after a weeklong holiday.

RISING DOUGH: Domino’s Pizza rose 6.1% as plans to buy back up to $1 billion in stock reversed the pizza chain’s earlier side. The stock initially fell after it reported surprisingly weak third quarter sales at established locations as it faces tougher competition.

RETAIL BRIGHT SPOT: Target rose 1% after the retailer said it was powering the relaunched web site of Toys R Us, which went live Tuesday.

CRUSHED CHIPS: Chipmakers tumbled after the U.S. blacklisted a group of Chinese tech companies that develop facial recognition and other artificial intelligence technology, saying the technology is being used to repress China’s Muslim minority groups. Ambarella fell 9.3% and Nvidia fell 3.8%.